Ange (pronounced Ahnzh, because her American parents had delusions of French ethnicity) is a professional killer who sees the world as it really is: a riot of neon-colored filaments.

The sky to Ange is thin strands of green and blue and red that crisscross a black void, and the sun is a churning mass of red, traced with silver and purple afterimages. People are tight weaves of pulsing gold and silver and purple wrapped in red and green.

This is how she has seen the world ever since she was Awakened. As an Awakened, she can manipulate those filaments of reality. All it takes is a little concentration–and her eyes.

"Waking Up Can Kill You Some Days" 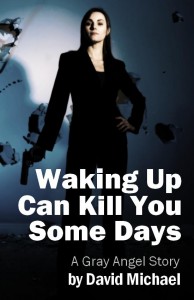 “Waking Up Can Kill You Some Days” by David Michael

The Gray Angel is a hitwoman with a heart gold. She always gives the target a choice. Because everyone deserves a choice. Even a petty gangster like Dennis Karnof. 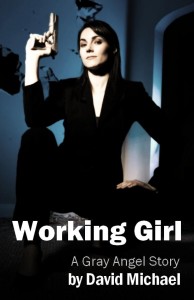 Hitwoman the Gray Angel’s latest target is elusive businessman Neil Spencer Thomasson, who is staying in a high-rise hotel with an unknown number of armed guards. Fortunately, Thomasson has called in an escort for the evening, a woman who comes highly recommended and whose face Ange hopes he’s never seen.

"Wind-Up Action Figure On Her Day Off" 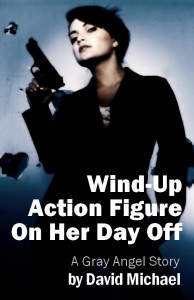 “Wind-Up Action Figure On Her Day Off” by David Michael

On those rare Mondays with no new contract, the Gray Angel wonders if that means there is no one on Earth who deserves killing. She tries to remain optimistic, but she’s sure there’s someone out there who needs to be given the choice of a bullet to the brain.