All Gator-man stories are available in trade paperback and ebook formats from Amazon, Barnes & Noble, Apple, Kobo, Sony and more!

One year ago, during Mardi Gras, Ash Turner was pulled from the arms of his lover, Jamie Derouen, by men working for her father. Those men drove Ash into the bayou, shot him in the back of the head, and left his corpse for the alligators. So it comes as a surprise to everyone–including Ash–when he wakes up in the muddy water of the bayou and walks back into New Orleans.

Mardi Gras is once again underway, but Ash isn’t there for the parades or the parties. He’s looking for Jamie. Nothing else seems important any more.

At the same time, though, there are forces looking for him. A police detective interested in a growing pile of missing persons cases. The men who thought they had killed Ash already. And something else. Something unseen that watches Ash from the swamp. 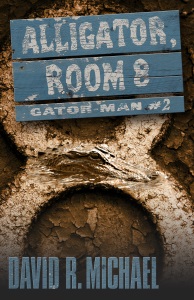 One year ago, Ash Turner was taken into the swamp, shot in the back of the head, and left for dead.

No longer dead, Ash is now stuck in New Orleans. As the only surviving witness to the “disappearance” of local pillar-of-the-community and suspected crime boss, James Derouen, Detective Marand of the NOPD wants Ash to stay put.

Detective Marand won’t listen, but Ash knows James Derouen isn’t coming back. Not from where Ash saw him “disappear”–down the gullet of an angry alligator god. That same alligator god has twisted Ash’s love for Jamie Derouen, James Derouen’s daughter, into an insatiable need to find her and…

Ash doesn’t want to think about it. He just needs to get out of New Orleans.

Before he can do what he was brought back from the dead to do.